St. John the Evangelist was founded in 1905. The first pastor was Rev. John H.C.Rutten from Holland and was ordained in Canada. Nathaniel McCaffrey wrote in a 1950 history of St. John's: "Father Rutten has fierce determination to see his fledging parish built on a solid foundation so that it might prosper and be a source of inspiration to a succeeding generations." The first Mass that was given by the new rector was for 90 parishioners from Dumont and Bergenfield.

Shortly after Father Rutten's arrival, a letter from Bishop O'Connor instructed the members to draw up articles of incorporation and to elect two lay members to the Board of Trustees. Edward F. Flood and Will B. May were elected as trustees and the approval of the name of the parish - St. John the Evangelist - was received from the Bishop.

Mrs. Loretta Simon was married in St. John's in 1913 and remembers a nun saying, "When you put your foot in St. John's, it's like someone putting his arm around you."

Parishioners had been pressing for a parochial school and in 1921 they were ready to open its doors. Before the school year began, the need to purchase additional land and build a larger, more permanent school became evident. In the first 18 months of operation the school attendance jumped from 66 to 240.

In 1946, Father McGuirk, then pastor, began to think in terms of building a new church. He worked closely with an architect in designing the church and insisted upon saving the memorial windows from the old church. In June 1949, construction began on the church that we know today. On December 9, 1950 Archbishop Thomas J Walsh officiated at the dedication. At this time, the Bishop saw the need of the parish and sent two assistant priests to help with the pastoral duties.

More than 50 years have passed since. There have been times of growth and times of decline. Today, we have more than 3,500 families registered in our parish and over 600 children attending our religious education programs. Our parish family is diverse and includes people from many backgrounds, especially Filipino, Hispanic, Irish, and Italian. Having celebrated our Centennial in 2005, we have much to look forward to and much to build on. St. John the Evangelist is still a place where you feel as if someone has put an arm around you. It is place of Many Parts.... One Body. 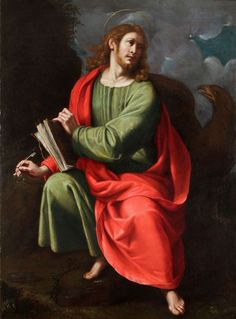 Biography of
St. John the Evangelist

The Apostle, John, was the son of Zebedee and Salome, and brother of James the Greater. The brothers were fishermen on the Lake of Genesareth. They were called by Christ to become His disciples. John was called the "beloved disciple". He founded many churches in Asia Minor and is the Patron Saint of Asia Minor. St. John The Evangelist wrote three Epistles, the fourth Gospel, and the Book of Revelation.

Links to biographies and painting of St. John the Evangelist:

Sign up to our newsletter
Become a ParishionerWeekly Bulletin

Monthly on 1st Sunday of each month 5:30pm

Mass schedule announced the Sunday before.

Monthly on 1st Sunday of October through June 3:00pm